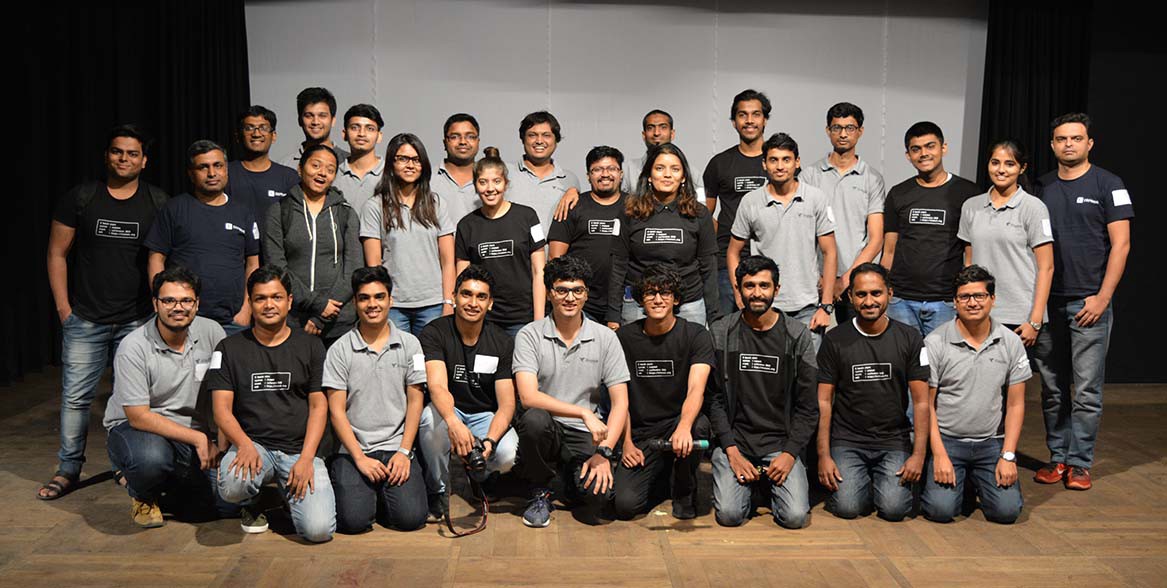 The team behind Frappe & ERPNext

Over my recent vacation, I got a chance to meet Rushabh Mehta, Founder, and CEO of Frappe Technologies & ERPNext Foundation.

Frappe is a unique company run by a smart and courageous founder and his team. I discovered them while building an ERP system and used a part of their code to manage taxes.

I knew I had to meet Rushabh when I found that:

I didn’t know him and had no common connections. If you’d like to know my approach, leave a comment down below and I might write a story about that. Long story short, I emailed him and he was kind enough to meet me for an hour.

I wanted to know why he open sourced ERPNext and how did the company achieve financial viability.

On reaching the Frappe office in Mumbai, I immediately got a vibe of a company in its growth phase. It was a clean hall with a meeting room and huge windows. From what I observed, I can bet that Frappe is close to their customers and their product has found a market fit.

It was 10 minutes after the scheduled time when Rushabh actually arrived. He had not confirmed the invitation to meet, didn’t respond to my emails on the day, and we had never spoken on the phone.

In fact, I didn’t even have his number. I had my doubts that I’d be sent back without a meeting. I wasn’t. He was just occupied and wasn’t able to respond to my messages. He had a very positive vibe.

After exchanging pleasantries and a casual introduction to who I was and what I did, I started asking him tough questions.

I have taken the liberty to paraphrase the responses while trying to keep the essence preserved.

Me: Why did you start Frappe?

Rushabh: Our family business was automating their furniture manufacturing process. The factory and the office were almost 150kms apart and both units had their own implementations of a famous ERP.

The problem was that they were out of sync. A bunch of files containing invoices and other docs was manually delivered to the office every day. Here an operator manually entered this data to the office ERP so the systems stay in sync.

The first module I created was an online invoice system.

Did you intentionally make Frappe open sourced or it happened accidentally?

Python was my first introduction to the OS community. Frappe couldn’t be otherwise. This was the pre-Github era where communities didn’t exist as they do today. I just uploaded the source on Google Code. The project didn’t have any traction. Only a dead mailing list and me continuously pushing code.

Does open source attract competition or creates a barrier to entry for new incumbents?

Both. There is always the risk of big players like AWS taking what you built and wrapping it into a managed service. It’s more of an ideology than a business plan. There are only a few examples of successful open source companies, like RedHat.

There is a shift in open source culture too. Companies are moving from “open source in spirit” to more of a “visible source” model that restricts Amazon fro blatantly packaging their work as a service.

What is your mode of financial stability?

We are inspired by the RedHat model, that is to provide bespoke consultancy around our core open source solution. That is what we are majorly working on. There are other independent companies that provide consultancy for ERPNext but we become the preferred vendor due to our authorship.

The other source of revenue is our hosted solution.

We don’t precisely track it but our guess is that we host about 20% of all ERPNext deployments. 80% of our instances are self-hosted. One of our partners self-host ERPNext for over 1500 of their employees. The very fact they are self-hosted is an accolade to ERPNext’s usability.

We are also looking towards tie-ups with public organizations. We are currently in the process of closing our largest client yet. If everything works out, we’d be managing around 30000 employees for that organization in a single instance.

It’s mostly organic and referral. We did initially spend money on ads. Our first signup came from Google Adwords.

Absolutely. People approach us all the time. Our new hires who were unaware of our model before the joined, tend to appreciate and get excited about our open source model.

I cannot draw a contrast between the quality of talent we’d attract if we were a regular company. But I feel that we find and retain good people due to our model.

What motivates you? What’s the big problem you are trying to solve?

There is no grand narrative. You just pick a fight. And you get better at it.

Like the scene from Matrix 3 where Neo keeps relentless keeps fighting Smith and his clones. That’s what I do on a daily basis. My job is to fix anything that stops my team from moving forward. It could be fixing a failed instance, talking to that client, taking out the trash, cleaning the washroom.

I have picked up the fight of providing seamless, Apple-like precisions and user experience to businesses.

There is no grand narrative, pick a fight.

What sectors according to you are currently underserved? Sectors that have a high probability to get big in the coming years…

Everything. We are in the continuous process of build-up and breakdown. It would have been impossible to think about community platforms like StackOverflow or Wikipedia a few years ago.

They practically should not exist, but they do. As I said before, pick a fight. Build a search engine. Google is an evil company and search is far from being solved.

About ideas, do you think that India as a country tends to pursue less risky hypothesis? Do you think we are lacking radical innovations?

In an absolute context, yes.

We tend to profit on arbitrage. That’s what TCS (one of India’s biggest tech companies with valuation comparable to Facebook) does. Over the years, we have developed a runbook to build a $5million business niche by creating software in India and selling it to western countries, mainly North America. Although saturated, this runbook can be used to serve more niches, but Indian ideas tend to be less radical.

The west has seen some crazy ideas grow. That creates spare funds to invest in new, equally crazy ideas and the cycle continues. This cycle has not picked pace in India.

We also talked about alternative schooling, past clients, current problems and future visions. When done, Rushabh kindly invited me for Samosa and Chai (Indian snacks).

If you are looking for an ERP, you might want to check out ERPNext.

Thanks for taking the time to read this and many thanks to Rushabh for talking to me.