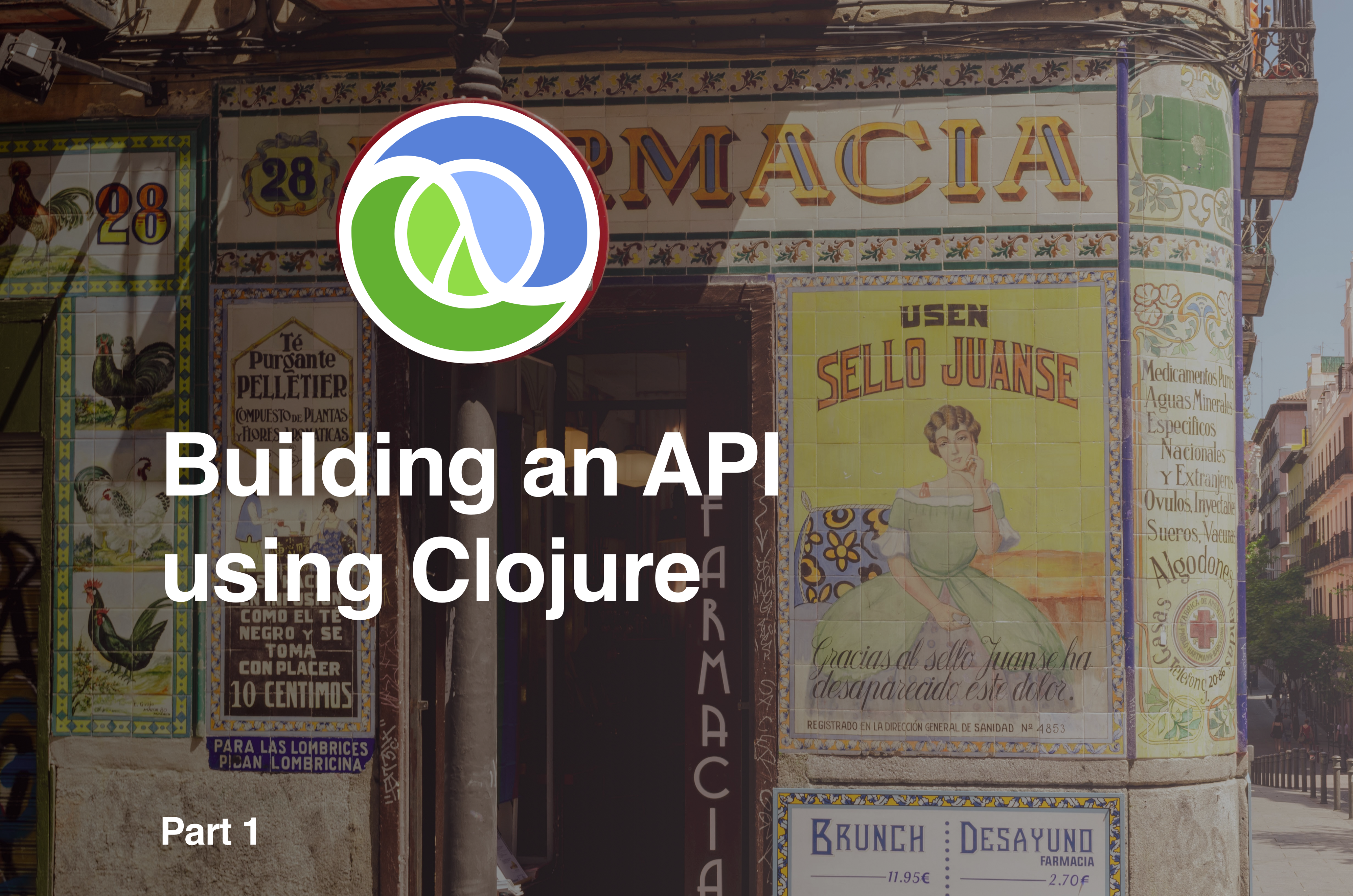 Base Photo by Jose Antonio Gallego Vázquez on Unsplash

Over the last 2 years, Clojure has become my primary language. It compiles to Java & JavaScript and has a few other advantages that I learnt over time.One of the disadvantage was the steep upfront learning curve. If you are just getting started with Clojure, this (and a series of future posts) might help you.For today, we’ll be building a Drug Dealer API. Imagine a drug store near you (don’t let the word dealer delude you):

This article assumes that you are comfortable developing APIs in some other language.Jargon terms are used without explanation. If you have ever developed and API with Node, Spring, Java, Python, RoR or literally any other framework/language, you are good to go.

For this exercise, our back-end consists of a database, configuration, a router and controllers. Clojure community doesn’t promote the idea of ORMs (for good).

There are a few batteries included frameworks like Luminous, Fulcro, Archane, Duct and Edge. You should definitely check all of them out and pick the one you like, but for the purpose of this tutorial, we’ll use Pedestal for handling HTTP and HugSQL to interact with an SQLite Database. This stack is simple to get started with and enough to grow into a production ready system.

Clojure has 3 build systems: Leiningen, Boot and deps.edn. Deps is the built in implementation, Lein and Boot are third-party libraries.You can think of them as node’s package.json. They help you specify dependencies and tasks.

Create a folder to hold the API

You might wonder why I created a src/dealer_api folder. It’s just a convention in Clojure namespaces.

An edn file is like a json file, except it has support for more data types than strings, and you type in Clojure maps and not JavaScript objects. Here’s what our deps.edn file should look like.

Check your progress by downloading dependencies

In the root folder, issue the clj command. This will download all the required dependencies and start a prompt called REPL.If you have ever played GTA Vice City, then think of REPL as a cheat code, that most other languages do not have. Your terminal should look something as follows:

LISPs are notoriously hard to write.

Clojure (and other LISPS) have a different syntax from most mainstream languages. sum(1, 2) becomes (sum 1 2) . The bracket is moved outside the function, leading your code to be just a collection of vectors (aka a tree). Now this is hard to write, because as your programs grow, bracket matching can become a pain.

That’s where Paredit and Parinfer come into picture. The purpose of these tools is to match your brackets for you. Automagically.Parinfer is like an Apple’s iPhone. Everything will work seamlessly out of the box. Paredit is like a flagship Android phone.

You’ll have to spend some time getting used to it.I’d recommend using Parinfer when you are getting started, or Paredit if you are brave. I started with Paredit, not because I’m brave, but because:

Parinfer is available for atom, vscode and probably all the other text editors that cool kids use. You can also use Cursive Mode for IntelliJ. I don’t know much about that, so will not refer to Cursive specific steps going further.

Run the REPL (and your app)

We have enough code for our server to start working. Go to the project’s root and start the repl using clj command:

If everything works, you should be in a prompt called a REPL. Here you can import your namespace and start the server :

If your code is correct, core/server function will freeze the REPL. At this point, you can go to http://localhost:8890/hello and your should see what you expect to see.

If you make a change to your API, you would not notice any change in the browser. Also, the REPL doesn’t give any indication that the server is running successfully. Let’s fix that.

Create an atom to hold your running server instance

Clojure data structures are immutable. They never change. Except using a special structure called atom. Our strategy to not freeze the REPL is to save the running instance of the server in an atom and return from the start function.We will get rid of the server function and require the refresh function:

We’ll also create a reset function that can be called to reload changes:

Now close the repl using Ctrl+C. This is probably the last time you’ll shut it down. Now start it again using $ clj.Next import the required functions: go and reset

Now go back to localhost:8890/hello and you should see your message. Change your message and reset the code as follows:

Again, go back to the browser, refresh and you’ll see the new changes.This DX is workable going forward. A REPL is always working in the background. You make changes and reset.

What we did here is not ideal. Most production projects tend to have a dedicated namespace for handling resets, but then again, this is not a prod project. This is only a get-your-feet-wet project.

Hmm, why did I have to do so much to get reset ?

Also it doesn’t have live reload like node does.

You have a valid point. Watch Simple Made Easy by Rich Hickey and probably you’ll be able to satiate your curiosity.